Start a Wiki
Running Late is the fourteenth episode of Underground Ernie.

Jubilee and Victoria have an argument after Jubilee wakes up late, which ends with them both throwing insults at each other all day. When Victoria stops at the botanical gardens, she sneezes after Mr Rails presents her with some new flowers, and she breaks her glasses. As Mr Rails guides her to the workshop, Jubilee takes over Victoria's line, much to her dismay.

Ernie's had to bring his mother's old vacuum cleaner into work to be fixed, so he drops it off at the workshop when Mr Rails and Victoria arrive. While inspecting the vacuum cleaner, Mr Rails decides it's unfixable and Ernie agrees that it needs to be scrapped. Victoria overhears their conversation and is worried they're talking about her.

Jubilee is showing off on Victoria's line, and goes so fast that he blows a gasket. When Victoria's glasses are fixed, she receives a message from Millie to visit International Underground Station, which she tearfully accepts, preparing for the worst. Once she gets there, she finds out that they were talking about the vacuum cleaner, much to her relief. Ernie tells her that Victoria is one of the driving forces behind the Underground being the best railway, and Victoria happily goes to rescue Jubilee.

Jubilee is told by Mr. Rails he'll have to remain out of action until the new gasket is delivered the next day. Victoria tows him back to the sheds. That night, the two friends make up their quarrel, and Jubilee promises to wake up earlier from now on.

"I will soon be forgotten..." "I will NEVER forget you, Victoria!"

"Without you, this Underground wouldn't be what it is today - the best." 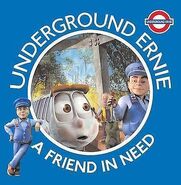 Jigsaw puzzle
Add a photo to this gallery
Retrieved from "https://underground-ernie.fandom.com/wiki/Running_Late?oldid=9759"
Community content is available under CC-BY-SA unless otherwise noted.