Mr Rails is lovable, friendly, loyal and very practical. He's always tinkering about with things to make them work again, preferring to "mend than spend". No job is too big or small for him, whether fixing up trains or clearing the line of rubbish, he does it with a smile. From the Multi-Tooled Maintenance Machine to a set of windchimes, his creativity knows no bounds and always comes in handy. His motto has always been "Mr Rails never fails!" 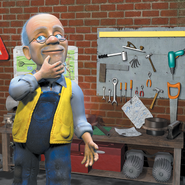 Mr Rails in the intro

Mr Rails in a flashback

Mr Rails dressed as a dragon

Mr Rails behind Ernie on the cover of Tunnel Times

Mr Rails in the control room

Using his binoculars in the workshop

Using the crane on the Multi-Tooled Maintenance Machine

Mr Rails in the snow
Add a photo to this gallery

Tool kit
Add a photo to this gallery
Retrieved from "https://underground-ernie.fandom.com/wiki/Mr_Rails?oldid=9722"
Community content is available under CC-BY-SA unless otherwise noted.