Jubilee is the youngest of the trains, and is very knowledgeable on current trends. He's gadget mad and constantly using the Internet, emails and all other kinds of new technology. He is voiced by Tim Whitnall.

The junior member of the Underground family, Jubilee is the young fun-loving teenager of the railway. Eager to please, his youthful energy can sometimes put him in conflict with the older members of the Underground, such as the incident when he and Victoria fell out over an argument about how efficient they were. He is sometimes considered mischievous but everyone loves him and wouldn't want that to change.

Jubilee is painted silver with his logo on either side of his face and a gold canopy that acts as eyebrows. He also has a red aerial on top of his cab.

Jubilee's self portrait made on his computer

Jubilee in the snow 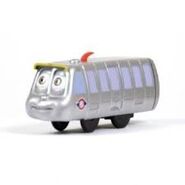 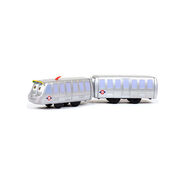 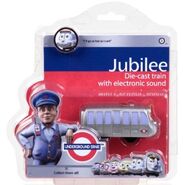 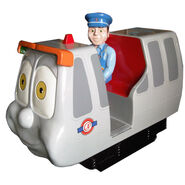 Coin-operated Jubilee kiddie ride
Add a photo to this gallery
Retrieved from "https://underground-ernie.fandom.com/wiki/Jubilee?oldid=9791"
Community content is available under CC-BY-SA unless otherwise noted.