Janet Brown (14 December 1923 – 27 May 2011) was a Scottish comedienne and impressionist who gained considerable fame in the 1980s for her impersonations of then-Prime Minister Margaret Thatcher.

In 1986, Janet and Thatcher met up face-to-face and struck up a friendship, occasionally meeting at 10 Downing Street. Janet also stayed at Chequers for a weekend once.

She was married to Carry On actor Peter Butterworth until his death in 1979, and they had two children. Sadly, Janet passed away in 2011 after a short illness. 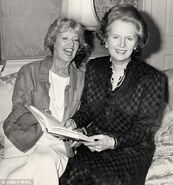 Janet and Lady Margaret Thatcher in 1986

Janet with the cast at a recording session
Add a photo to this gallery
Retrieved from "https://underground-ernie.fandom.com/wiki/Janet_Brown?oldid=7715"
Community content is available under CC-BY-SA unless otherwise noted.