The eponymous Underground Ernie is the jolly, kind-hearted supervisor of International Underground and the main character of the series. The public can rely on Ernie as he comes from a long line of underground supervisors.

The caring guardian of the Underground, Ernie loves getting his job done but is serious and stern when he needs to be. He is particularly good friends with Millie and Mr Rails and the trains look up to him when they have a problem. Ernie loves getting to work in the morning, as he believes early risers have more fun.

Ernie wears a blue hat with his name badge on it. He wears a blue waistcoat fitted with a radio and pocket-watch over a light blue shirt and blue trousers. He wears brown shoes. 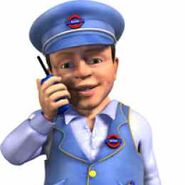 Ernie in the intro

Ernie dressed as a knight

Ernie without his hat on

Ernie and the Purple Teatime Tree

Ernie on the cover of Tunnel Times

Ernie in the repair workshop

Ernie with his nephews Sam and Dan

Awarded by the mayor

Real Ernie at a Day Out with Underground Ernie event

Ernie and co-creator of the series, Sid Rainey
Add a photo to this gallery 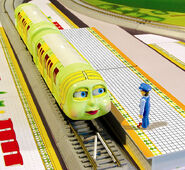 Fancy-dress costume
Add a photo to this gallery
Retrieved from "https://underground-ernie.fandom.com/wiki/Ernie?oldid=9770"
Community content is available under CC-BY-SA unless otherwise noted.