Start a Wiki
Brooklyn and Rocky Two-Shoes is the fourth episode of Underground Ernie. It originally aired on CBeebies on June 8th 2006.

Brooklyn is visiting from New York, bringing famous athlete Rocky Two-Shoes with him, much to the excitement of Hammersmith and City. Rocky is undergoing serious training from Brooklyn, but Brooklyn is acting rather overzealously and puts Rocky off the competition.

Ernie's also entered a competition; a vegetable one at Sprout's Organic Farm. Circle delivers the vegetables for him, but Ernie forgets to load his prize cauliflower. At the sports stadium, Rocky has cold feet and sneaks away, prompting Brooklyn and Ernie to start a search for him. While doing so, Ernie spots his prize cauliflower on the platform, and upon hearing of Rocky being sighted at the funfair, picks it up and takes it with him and Brooklyn to find him.

Rocky's found at the funfair, and he apologises to Brooklyn for letting him down, while Brooklyn apologises for pushing him too hard. When Rocky sees Ernie's cauliflower, and Ernie tells him about the vegetable competition, Rocky takes it from him and races with it to the farm. Ernie wins the vegetable competition, and now Rocky's gained enough confidence to enter the race. Sure enough, Rocky wins the marathon, and he and Brooklyn return to America feeling proud with themselves. At the sheds, Bakerloo determines that fun is good for everyone, and all the trains agree. 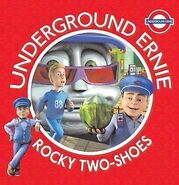 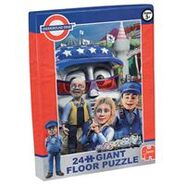 Jigsaw puzzle
Add a photo to this gallery
Retrieved from "https://underground-ernie.fandom.com/wiki/Brooklyn_and_Rocky_Two-Shoes?oldid=9345"
Community content is available under CC-BY-SA unless otherwise noted.