Bakerloo is the detective of the Underground, known for his sharp thinking and attention to detail, he's been known to help Ernie out of some of the most difficult situations.

One of life's greatest eccentric characters, Bakerloo is well-meaning and kind, but also a bit of a coward and forgetful, such as when Jubilee's holographic dinosaur started rampaging around International Underground station, he was worried that dinosaurs had come back to life! He speaks elegantly, often using words that confuse the younger trains, and is also very quick to jump to conclusions. Nonetheless, he is a valuable asset to the railway, and one of the most respected trains.

Bakerloo is painted grey with green doors and his line's logo on either side of his face. He wears a deerstalker hat akin to that of Sherlock Holmes, of whom he is based on. He wears a monocle over his right eye. 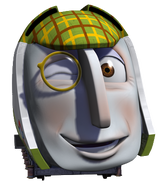 Bakerloo with the twins and Circle 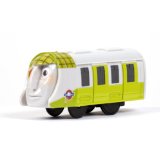 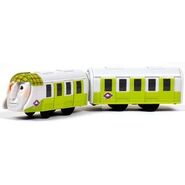 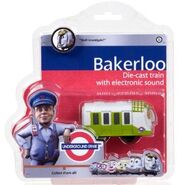 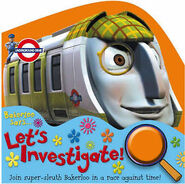 Talking book
Add a photo to this gallery
Retrieved from "https://underground-ernie.fandom.com/wiki/Bakerloo?oldid=9563"
Community content is available under CC-BY-SA unless otherwise noted.